Police forces across the country have been adapting to a shifting landscape on social media during the lockdown. But what has actually changed, and how have police forces adjusted

What We Can See

The data we collected has some fascinating insights into how current events have affected social media use for police forces. We’ve rounded up the conclusions below and what they mean for your team. 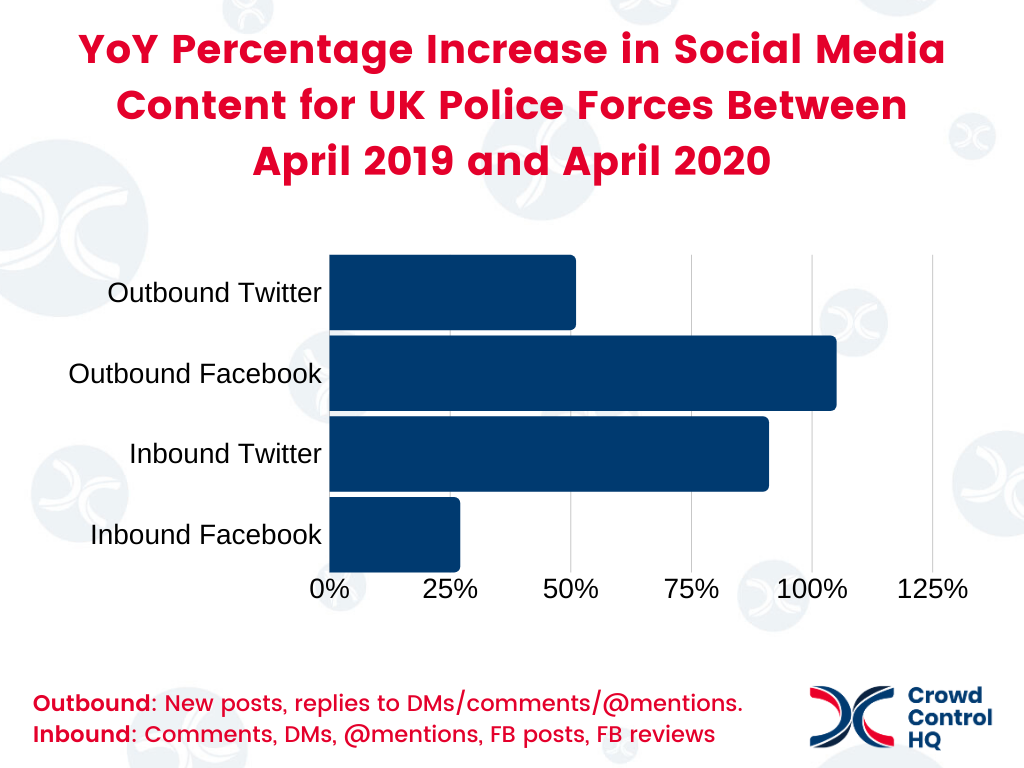 The past few weeks have been information overload for many UK citizens, and it can be hard to know what information is accurate. Police forces have stepped up on social media to answer questions, share important updates and amplify official information from the government.

We’ve seen a 105% increase in outbound content (new posts, replies to DMs/comments/@mentions) on Facebook and a 51% increase on Twitter from police forces, showing just how hard they’re working to keep the public informed with accurate information.

Social media has never been more accessible than it is right now, with 100% of digital consumers having at least one social media account. As people are stuck at home with more time on their hands, many are using social media to reach out to organisations for answers.

While Facebook remains the most popular social media channel for the public to reach out to their police forces, Twitter has seen an enormous uptick in users contacting police organisations. The fast-paced, almost real-time nature of Twitter means that it’s easier to have a conversation with organisations and users learn what they want to know faster.

What This Means for Police Forces

Based on our findings, there are specific takeaways that police forces across the UK could implement into their social media strategy during the lockdown and beyond.

There’s more focus on social media than ever before, so now is the time to be present on your organisation’s social media channels. Continue to put out valuable content that is appropriate to the situation, and use experts in your team to quickly and effectively answer questions that the public may have.

Be Present on Social Media

As more people turn to you for answers on social media, it’s essential to acknowledge and resolve each message. Listen to their questions and concerns, and answer them honestly to help them through an uncertain and frustrating time.

While Facebook is still a popular channel for the majority of social media users, Twitter has also proven to be a critical channel for reaching out to organisations. Evaluate your presence on your social media accounts and focus attention on channels that the public is using to get in contact with you on.

During the national lockdown, police forces across the country are doing vital work to keep us all safe and informed; both in-person (while distancing!) and online. By maximising your force’s use of social media, you can ease the public’s mind, pass on important updates and keep the community engaged while everyone is stuck at home.