The situation: fast-food giant KFC found themselves in an unusual and financially damaging position over the past couple of weeks. Their new delivery partner, DHL, failed to deliver their supplies of chicken on time, forcing the company to temporarily close most of their UK restaurants.

There’s no doubt that this incident will have affected profits but what impact has this had on the KFC brand? In today’s blog we’ll be examining the fall out from the crisis and where KFC now stands in the eyes of customers with some unlikely results! 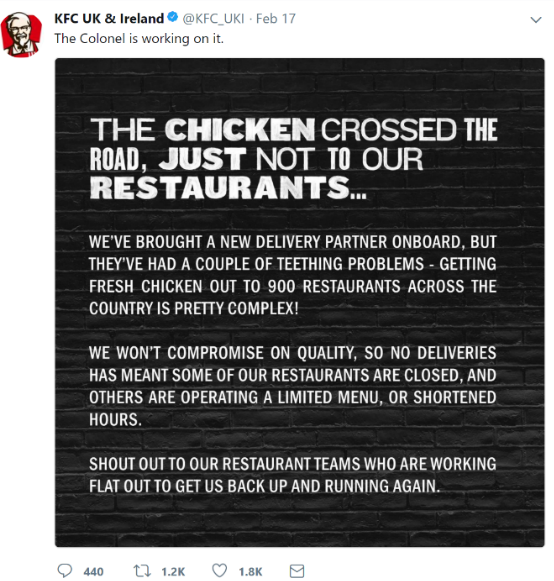 17th Feb — Acknowledgement: As soon as news of the chicken shortage broke, its clear a crisis plan was activated. This first tweet from the KFC UK & Ireland team not only set the story straight as to what was happening, but set the humorous tone for what was potentially about to become one of their best pieces of PR.

It’s great to see that organisations have learnt lessons from previous crises such as the VW emissions scandal and recognised that damage can be minimised by providing responses rather than choosing silence.

20th Feb — Competitor Challenges: The beauty of social media is the ability to quickly capitalise on opportunities. Rivals such as KFC and Iceland required no prompting to get involved and offer up alternative sources of chicken. On the surface this good humoured ‘banter’ is just that, but these quick-witted tweets are very powerful. Having been shared thousands of times, both brands have created fantastic brand awareness that translates into even more conversations and opportunities to engage, perhaps even poaching custom from KFC.

It may also have been a bit too soon to joke about gravy: 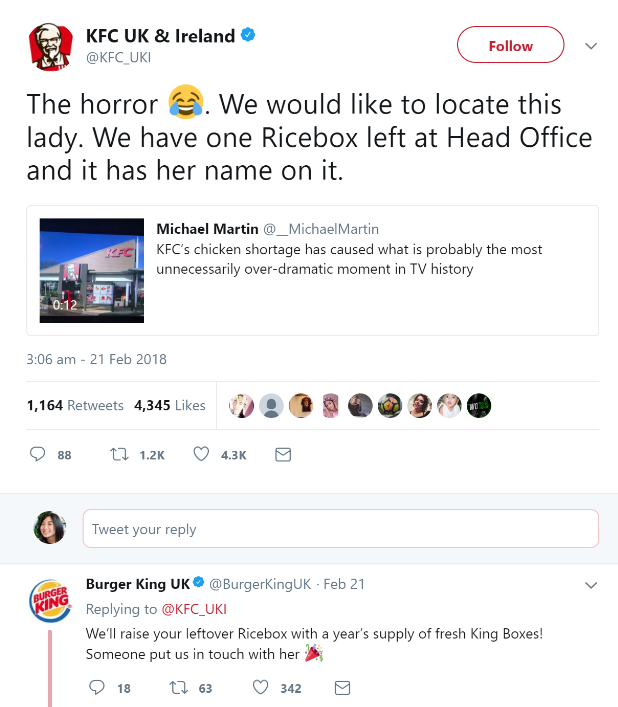 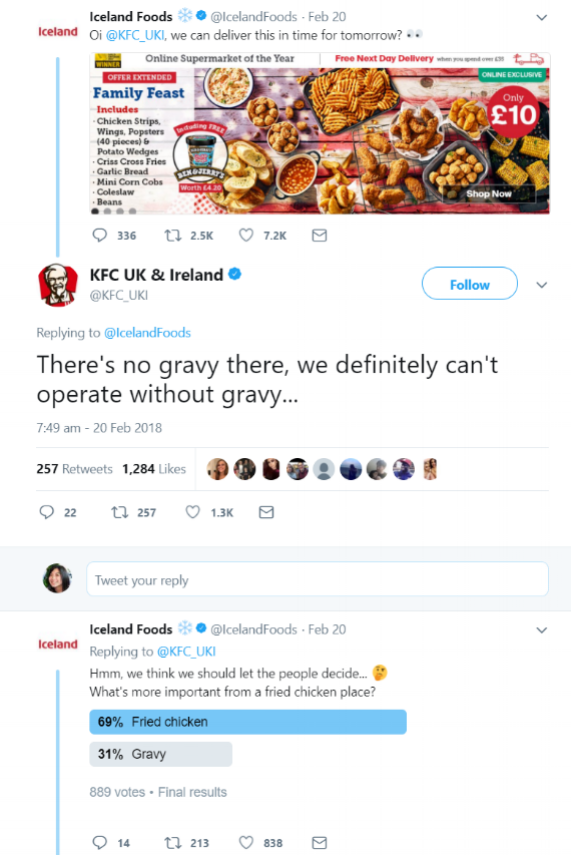 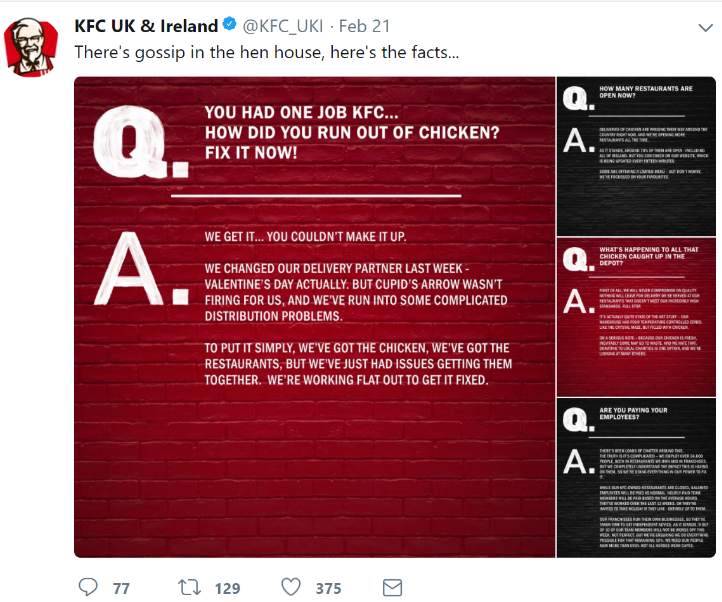 21st Feb — Reassurance: Humorous comments aside, its clear stakeholders and customers alike had deeper concerns than how they were going to get their chicken fix. Food wastage and pay for employees were topics that threatened to turn audiences against KFC. Again, employing the principle that openness and transparency are more beneficial than silence, the organisation responded with a quick set of FAQs. Heading off these questions before dangerous assumptions could be drawn was an excellent play to maintain focus on their brand building comical messaging. 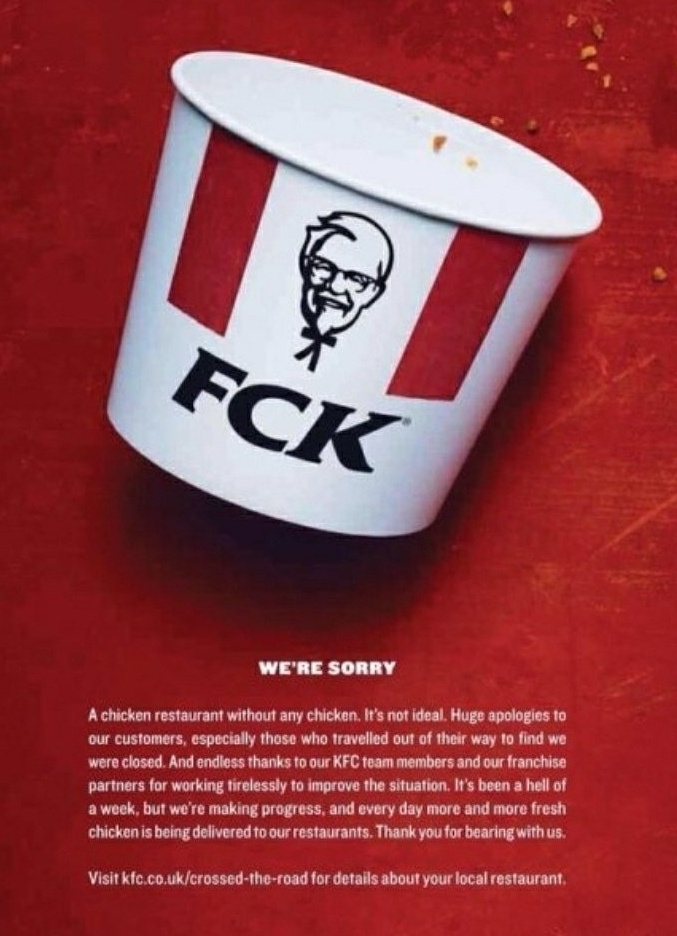 23rd Feb — Apology: As many of the restaurants started to reopen, the organisation took the conversation off line with a full-page ad in the press. This move to print not only piqued the curiosity of a greater audience who may not have seen their activity on social media, but also added authenticity to their apology.

This final step is one often missed by organisations keen to get back to business after a crisis. However, taking the time to address stakeholders, particularly with a well-crafted and humorous message is very powerful. This image has already been shared thousands of times, proving it will take more than a lack of chicken to dampen the KFC brand. 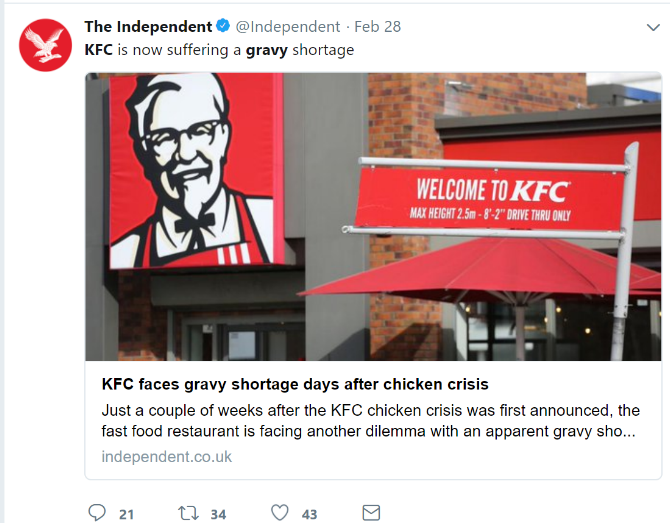 28th Feb — It Continues: That being said, according to many sources, the controversy is not over yet! Except this time, it’s not chicken — it’s gravy!

Learning points for other brands:

1. Speed — social media is the fastest form of mass communication and so if organisations do not act quickly they face losing control of the crisis. This is why it is so important to have a crisis management plan that can be enacted as the crisis hits — find out more about crisis management here.

2. Openness and honesty — in being clear and honest with stakeholders, consumers’ faith in brands are likely to be stronger as trust is somewhat maintained. Once this is lost it is much harder to rebuild and will multiply the cost to the organisation.

3. Take control of the agenda — finally, taking a different look at this situation, is this light-hearted chicken scandal an elaborate cover up for the fact that according to the GMB union, the switch to DHL led to 255 redundancies at their previous partner, Bidvest, and the closure of a depot. If this message were the focus things may have been different, yet in the hands of PR geniuses the outcome is fantastic brand awareness and celebration of KFC.