Hit enter to search or ESC to close

Wiltshire Police is the oldest police force in the UK with over 2,000 police officers and staff serving a population of around 684,000 people. 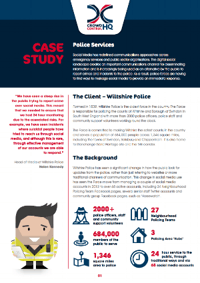 The Force experienced a steep rise in the public reporting crime via social media, and also recognised that the public increasingly turn to social media for updates from the police over traditional channels such as the website.

This transformation to social media has seen the Force grow from a few accounts to over 68 social media accounts across Facebook and Twitter!

Using CrowdControlHQ, Wiltshire Police have been able to: