The Best Advice on Developing a Unique Social Media Personality

For many of us, when we visit corporate social media accounts, we’re not necessarily expecting to be entertained, moved to get involved, or even full on cracking up at our phone or laptop screens.

But that’s exactly the disconnect and pleasant surprise that Doncaster Council have capitalised on to ensure that their message is heard in the county, across the UK and in some cases internationally.

To explain just how their content made it onto Twitter’s moments and got picked up by Sports Illustrated, yesterday we invited Doncaster Council’s social media guru, Rob Jefferson (@RobJefferson on Twitter) to join us on the latest CrowdControlHQ webinar.

Once again it was fantastic to see lots of our readers join us live yesterday, but for those of you who not only missed out on hearing Rob’s very wise words, but also Mia the cat’s guest appearance, this blog is for you!

We’re covering the key take-aways you need to know and starting the #GetMiaOnTwitter campaign (if you don’t know what we’re talking about, check out the video recording!)

Firstly, why do we need to be concerned with personality and tone of voice on social media?

Even in the run up to our webinar, we received a couple of questions about whether there is value in spending time and energy on giving a public body like a council, a personality. As Rob confirmed this is a question he is frequently asked and is a very valid concern. Building a personality on social media is not simple nor easy and requires planning and commitment.

But, as I’m sure many Social Media Managers have found, you might put your heart and soul into a piece of content for social media to convey an important message and find that it just doesn’t get the engagement you expected.

It’s very easy to fall into the common traps of focusing on amounts of content rather than the quality and relevancy of the content itself, and to slip back into default mode of broadcasting rather than engaging.

It’s at this point that Rob advised taking a step back to consider what you yourself are drawn to on social media. Is it the types of content you are creating? Or do you favour content that is human, has personality and stands out?

For Doncaster Council, recognising this was the first step in changing their approach to social media to drive more positive conversations with more people!

Having the confidence to do something different

It’s all well and good knowing how to make change but doing something about it is entirely different. For many Social Media Managers getting creative with social media content and pushing the boundaries comes with a certain level of trepidation.

Often the only way to move beyond this is to trust your instincts, be brave and go for it. Taking planned risks is sometimes the only way that your social media channels will grow and reach their full potential within your organisation.

A nice example of risk-taking was Doncaster Council’s #Binvasion campaign. The Comms team had been tasked with letting residents know that they would soon be receiving a new recycling bin. However, when the team saw some photos that had been taken of the bins all stacked up, one of the team couldn’t help but notice the bins looked like they some kind of alien invasion preparing to take over Doncaster.

Taking the idea that if you find it funny and interesting then others probably will too, the team decided to take it further and share their thoughts on social media. This sparked a huge response with residents sharing their own version of the #Binvasion by creating spoof videos and photos. 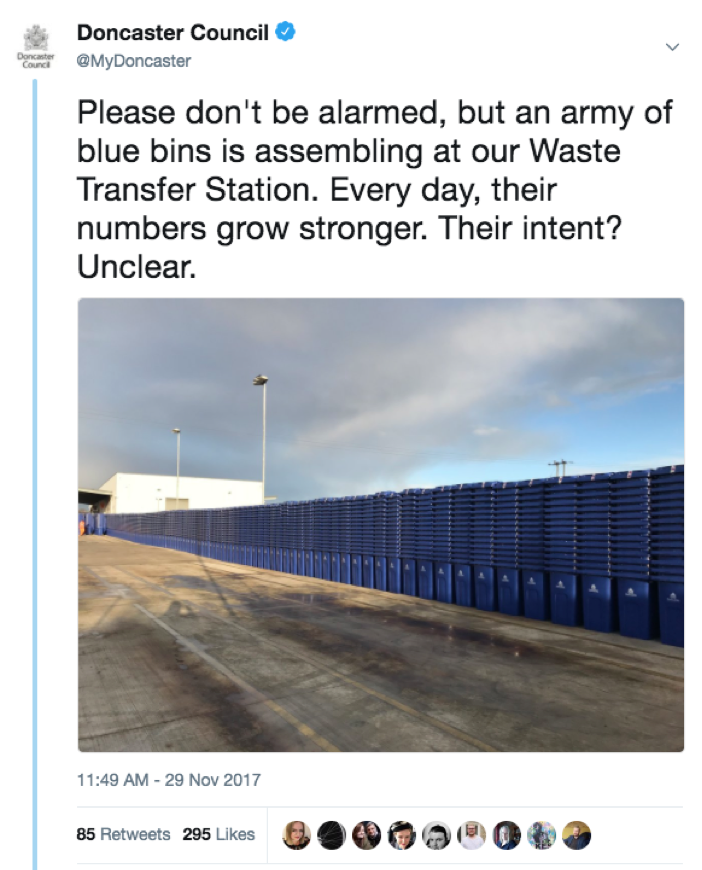 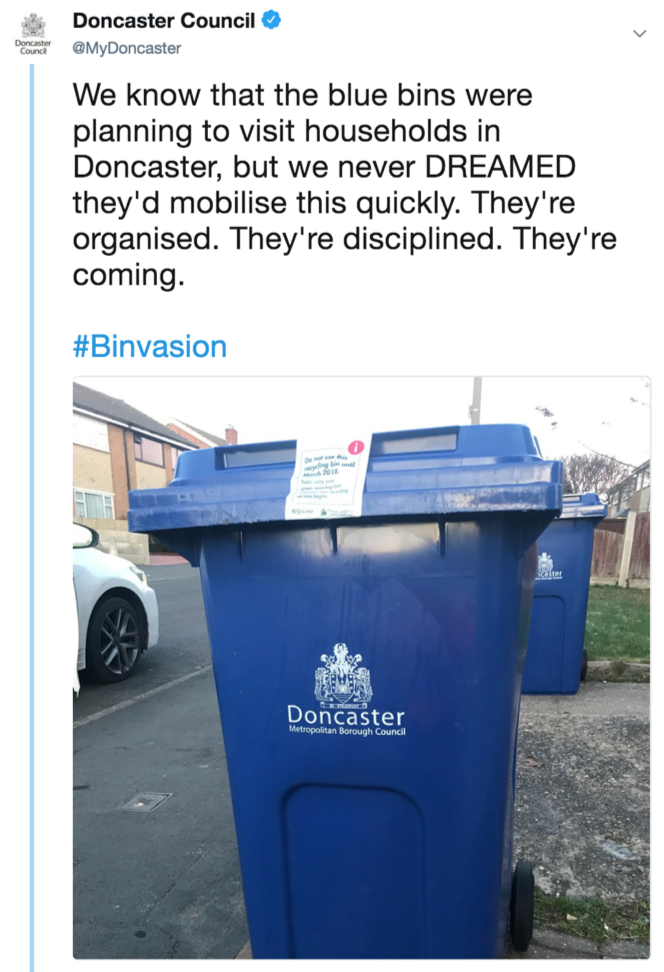 To keep the conversation going and use this awareness to also promote the county’s new waste transfer station, the team also created a follow up video showing just how terrifying this bin attack was. We recommend taking a couple of minutes to watch it for yourself!

Needless to say, it was a hit because it was a match between what the council needed to talk about, whilst engaging and entertaining the audience.

Building this kind of relationship with your audience is so important because when the time comes that you do actually need their help to respond to a crisis, they are more willing to help because you’ve put the effort in to win their trust and attention.

How can you define your own organisation’s personality?

For Doncaster this was:

Likewise, consider what you don’t want your personality to be, which for many is likely to include things like boring, unrelatable and bland!

So now you know what you want your organisation’s personality to look and feel like, but it can sometimes be difficult to envisage.

At this point the team at Doncaster sought inspiration from brands they admire that are already personifying the traits they were looking to portray, and we have to say, a few of our favourites are in this list too!

1. Innocent — the smoothie-makers are a great source of inspiration on how turn even the most seemingly simple message into hilarious shareable content, we’re taking an example sticking with the cat theme.

Celebrate #InternationalCatDay by demanding to be let outside then immediately asking to come back in again.

2. Wendy’s — if you’re wondering how to push the boundaries and have fun with customers look no further than Wendy’s, this is just a taster of how sassy the team are!

3. Yorkshire Tea — if you’re a regional organisation look to Yorkshire Tea to learn how to promote local values, incorporate colloquialism and beam pride in your area.

4. Orkney Library — the team here create lots of lovely content that listens to their audience, they’re also the creators of a meme taking Twitter by storm!

We are not just a library. We are also the home of the #Orkney Archives which contains documents dating back to the 16th century.#MusMeme #WednesdayWisdom pic.twitter.com/RoqLfTPt36

Omar is the type of person who searches for his name on Twitter and doesn‚Äôt find anything. https://t.co/3XeWN0Wuoz

Putting it into practice

Finally, it’s a case of actioning your planning and beginning your journey to embodying the personality and tone of voice that’s right for your organisation.

To do this, Rob recommends the following advice:

1. Start with a smaller team of colleagues focusing on creating and responding to your core social media content, just while you experiment and figure out what works. This will help to ensure that the tone is right and remains consistent while your audiences get to grip with the changes.

2. Remember that creative ideas don’t always appear immediately, it’s important to schedule time to ideate and discuss options. This is an investment that will pay off! The campaign for #DoncasterGrittingWorldCup is a prime example of this – the team created 268% more social media content during this month than average which is a considerable investment but it meant they reached an audience of 11.9 million people which is phenomenal! 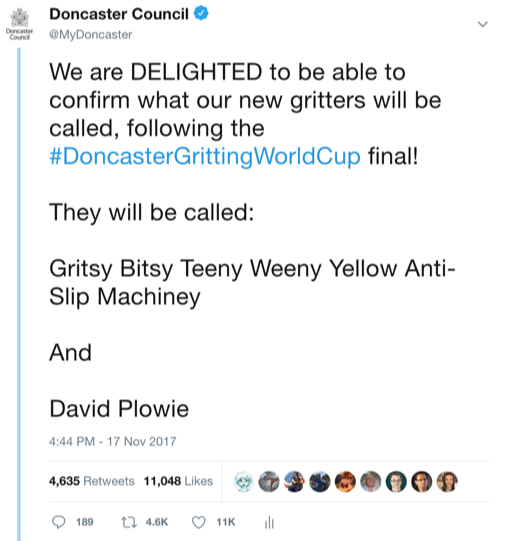 3. Just as you should take the time to devise new social media campaigns, it’s equally important to set time aside to evaluate the results and use this information to inform future decisions.

4. Prepare for some failures – not every campaign is going to set the world alight so remember that just because it hasn’t worked this time doesn’t mean it won’t ever.

5. Finally, as Helena Langdon from Innocent said “embrace the power of nonsense”. By doing this Doncaster Council actually featured on Twitter’s moments – the team simply shared the comical interaction below and it spread! 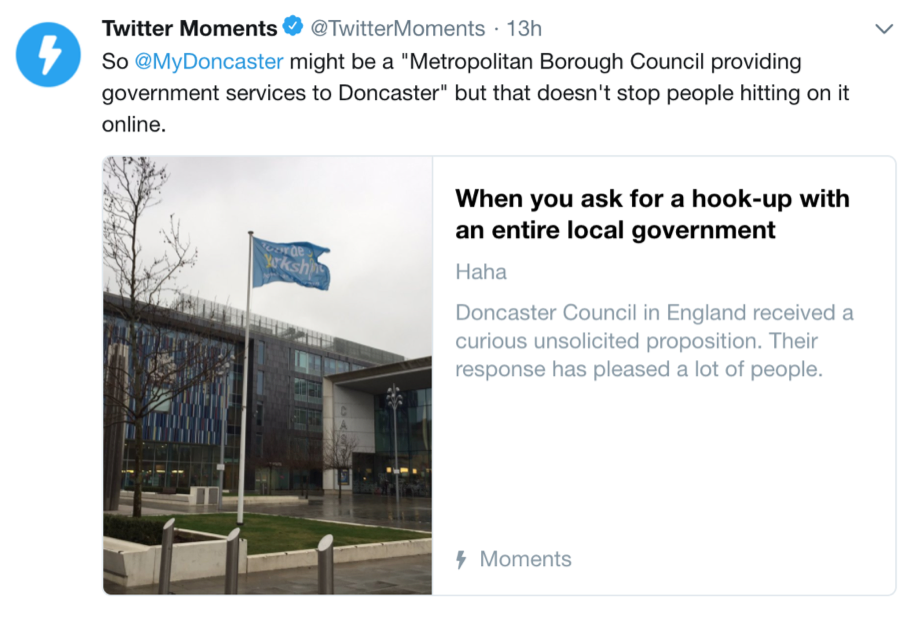 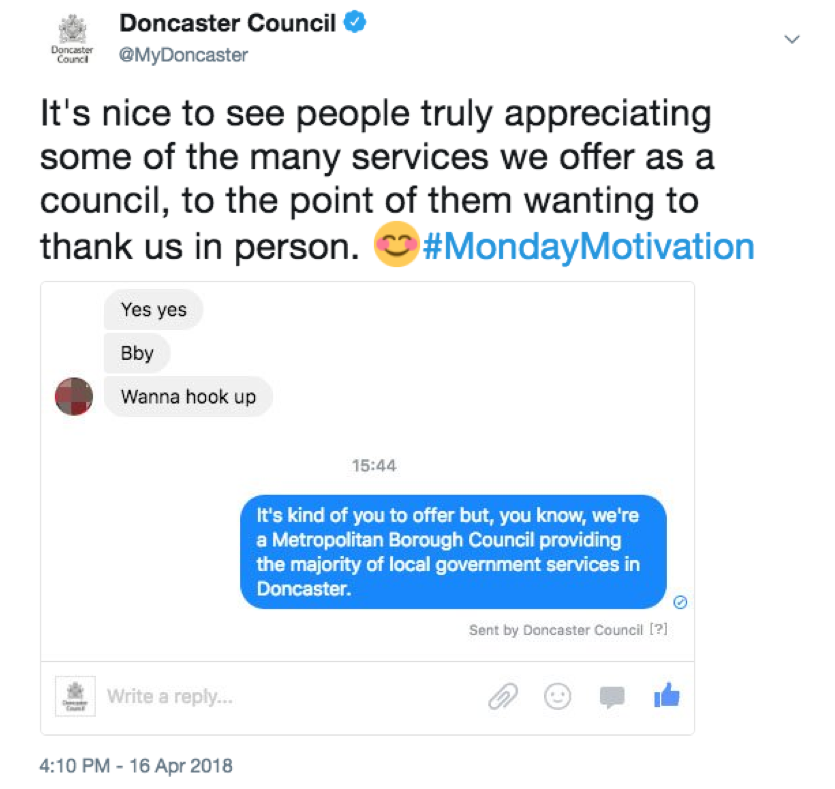 So that was our write up of this week’s webinar, special thanks again to Rob for taking the time to share his experiences in developing a public personality for Doncaster Council. We certainly learnt a lot and we hope you did too!

As always, we love hearing your thoughts so please get in touch @CrowdControlHQ to share your feedback, support #GetMiaOnTwitter, or just to say hi!